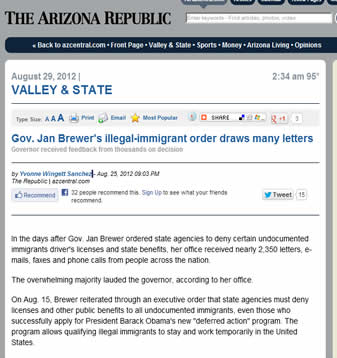 Pro criminal and extremely liberal biased news paper, “The Arizona Republic” recently published an article entitled “Jan Brewers Illegal Immigration order draws many letters” , According to the article nearly 2350 letters where received by the governors office drawing criticism and complaints.  The problem is not that the Governor drew criticism, or that “The Arizona Republic” with its tireless devoted news professionals where quick to report the issue, its the amount.

With nearly, a word which is a lot like the old fishing stories people tell where the fish just keeps getting bigger till it consumes your arm and leaves you stranded clinging for life on a drum in the middle of an ocean, NEARLY 2350 of a states who’s population according to World Population Review is 6,482,505 or we could say nearly 6.5 million, is less than .00000000000000003 of Arizona’s population, of which I bet a few of those letters where written by Politicians of other states, members of special interest groups outside of the state of Arizona, let alone the actual number of legal , non-dream act folks, and I am sure that number further plummets.

Not surprisingly, the Article is written by a Yvonne Wingett Sanchez, with a quick trip on Google reviles a slew of personal information and interesting, including “Not letting newspapers die” , which is ironic as it is exactly the kind of article she wrote that further fuels the fire in letting news papers such as “The Arizona Republic” burn in the fire of online blogging, citizen journalism and how the world would rather watch TV or Facebook it than wipe their ass with liberal biased crap.