Marc Thiessen went on Comedy Central’s The Daily Show, to promote his new book “Courting Disaster”.  Unlike most inviews,  Steward and Thiessen exchanged words which started to grow into a heated debate.  Thiessen who inferred that lawyers who defend terrorists, are terrorists themselves.

Stewart once again showed us his logical and critical thinking in pointing out the reckless double standard that Thiessen believes in. Thiessen who’s intellect is as questionable as the former administration he worked for, found himself in a battle of wits in which he was clearly out classed, and as such decried “he was unfairly treated”

Even as Thiessen was given an extended version online to better explain his position, and Stewart lightened up, the man clearly failed to win any favor nor clearly defend his position with anything other than opinion.

To Thiessens own discredit, He should have been aware of the format in which The Daily Show operates. A quick google search could have reviled that Stewart despite hosting his show on Comedy Central is clearly aware of the talking points and is articulate enough to verbally engage anyone and come out the winner. 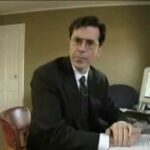